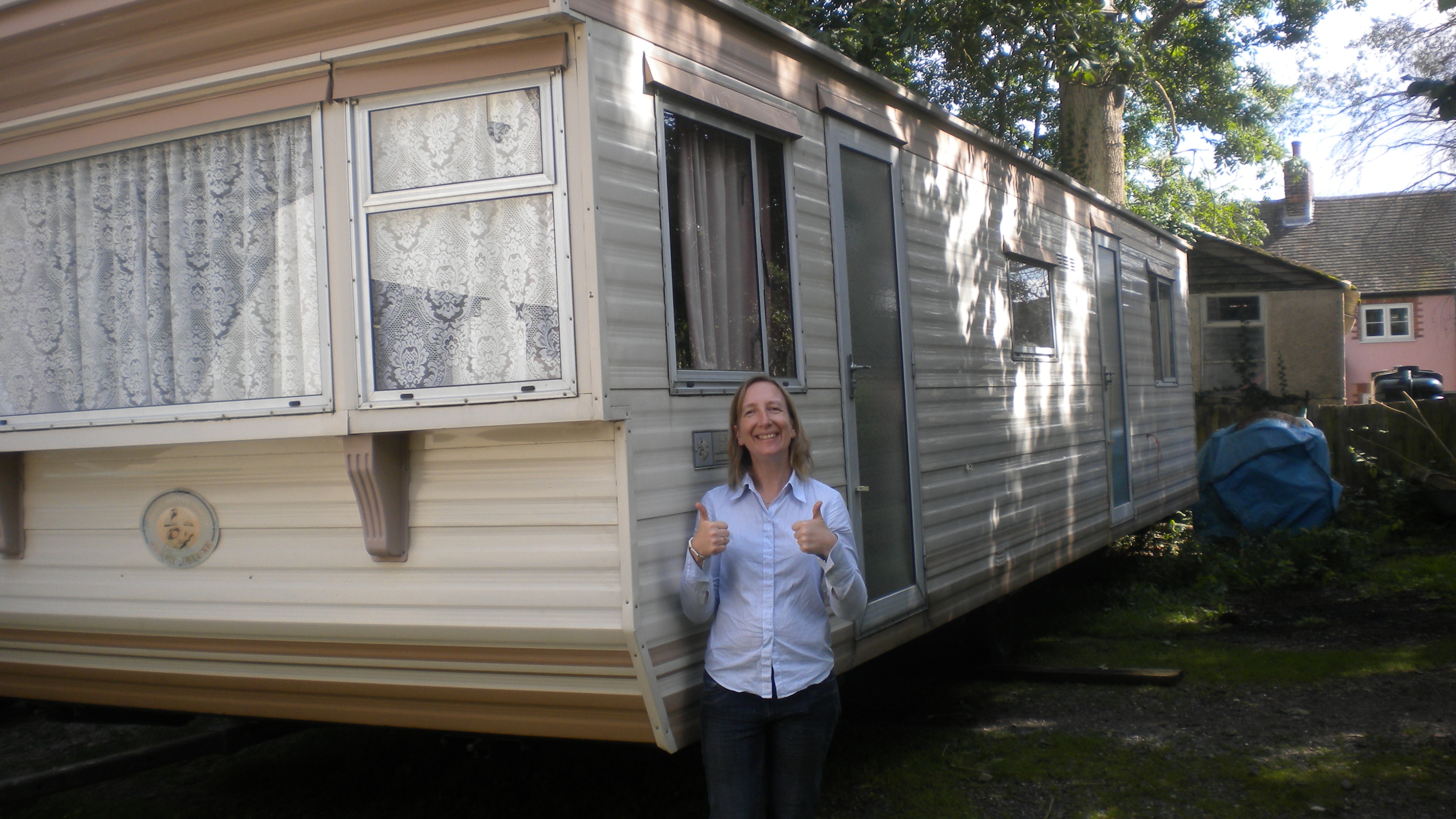 In 2012 we decided to extend our two bedroomed cottage to create a family home. This was to be our ‘forever’ house. We had a fantastic architect who designed something awesome and we found an equally awesome builder. The project was estimated to take 6 months and would require us to live elsewhere during that period.

We wanted to be on site but anticipated that the build might take longer than expected. Renting somewhere in the town nearby might not have the flexibility we needed, would be costly and we would not be close by. What about living in a mobile home on the driveway…..?

I had a close friend who had lived in a mobile home for 3 years whilst undergoing a complicated building project. She had a toddler, a new baby and a puppy during that period. I’d witnessed the Moses basket being jammed between the bed and the side wall; I’d played with the toddler’s toys from the one basket stored under the coffee table; I’d seen my friend light the gas fire in the morning and scraped the ice off the inside of the windows. If she could do it, I could do it.

We sourced a mobile home 20 miles away and had it delivered. We moved in during October 2012, taking all the basics we needed from the cottage – minimal kitchen equipment, minimal clothes, minimal toys etc. We purchased a tumble drier, which we located in the garage, as drying wet clothes in a mobile home might be a step too far!

When the builders arrived on site they said ‘At the last job we worked on the family started out in a mobile home, but couldn’t hack it after November….’

I never doubted for one moment that I would make this work. I was 100% committed to this period of my life being a success. I looked upon this as an adventure, something to be conquered. Having this positive and resilient attitude that NOTHING was going to get in the way of that made all the difference to how I managed the challenges when they arose.

At that time I my son was 4 and had just started school, and my daughter was 2. My husband was travelling for work and was away for a week every month.

2012 was one of the coldest winters in a while and included a couple of bouts of snow. I remember collecting my son from school pulling him on the toboggan! Sometimes it was pretty grim. Seeing your breath as you read your 2 year old a bedtime story is not ideal. Various challenges arose, as you can imagine. The boiler didn’t seem to be firing up properly and when the engineer came he condemned it….taping it up with yellow and black cellotape! Great!

My lowest point was when my husband was abroad, I had a sickness bug and the water pipes froze in the cottage which meant we had no running water in the mobile home. I de-camped to my parent’s house that day!

A positive attitude is a mental state that expects the best to happen. It is actually positive thinking – the habit of believing that things will turn out well and not allowing negative thoughts and doubts to disturb this belief.

The 6 benefits of having a positive attitude:

2.A positive attitude enables creative thinking. It’s a way of looking at life and situations with a broader vision and finding creative solutions. With a positive attitude, you are not afraid to look for new ways of doing things.

3.A positive attitude carries optimism as one of its main characteristics. It means hope and expecting situations to improve and plans to turn out well.

4.A positive attitude incorporates motivation. This is the energy and zest to do things and accomplish goals. When motivation is present you are keen on spending time and energy on the task in hand. When you are sure of yourself, believe in your abilities and do not allow anything to discourage you, you become motivated.

6.A positive attitude enables you to build resilience when things don’t go according to plan. Resilience allows you to rebound from adversity instead of staying stuck. A major component to resilience is the ability to maintain daily routines while coping with major setbacks.

So, we ended up living in the mobile home to August 2013, a total of 10 months, when we were finally able to move into a fully restored cottage with a beautiful extension. It had its highs and lows, but it was 100% the right thing to do for us and I have no doubt that my positive attitude made it the success that it was. How can you commit to having a positive attitude with your next adventure?

6 ways to progress in your personal and professional development, just like cleaning the kitchen

This is not my kitchen...but I wish it was! How do you manage your kitchen?…

I talked her through a panic attack. How positive mental fitness helped one friend.

It was 6 months ago and I was at work. A friend, let’s call her…

5 ways to boss the summer holidays like a pro!

Barricane Beach - Woolacombe, Devon The summer holidays are in sight. That’s good, but it…